Following a two week postponement and being spared the wrath of tropical storm Erika, we were able to bring Dr. Davis back for our third clinic of the year.

Due to a late plane arrival we didn’t start until 11:00 A.M. in Port Howe, where we were met by the most enthusiastic and patient crowd we have seen to date. Many exams, shots and fourteen surgeries were performed. It was wonderful to see three of the puppies Dr. Davis wormed in May back for spaying and neutering. One dog who had been dropped off and awaiting surgery proved to be a little reluctant about the whole thing. He simply ran away!

It was much quieter in Arthur’s Town on Sat. Dr. Davis spayed three and neutered one dog. He surgically removed a fatty growth from another. Deworming, rabies shots and travel documents were issued. Dr. Davis spayed the rescue dog Andrew nursed back to health and has found a home for her. We love a success story!

All in all, a successful weekend for the Humane population. We offer a huge thanks to Dr. Davis and Andrew for their time. And, Amelia, thanks so much for the photos! 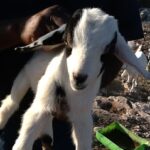 Past Events and Blog Posts

We now have set up a Yard Sale Shop at Kendall Seymours in Knowles.

All items are donated and all proceeds go to CIHS. Open Fri 1-4 and Saturdays 12-5.